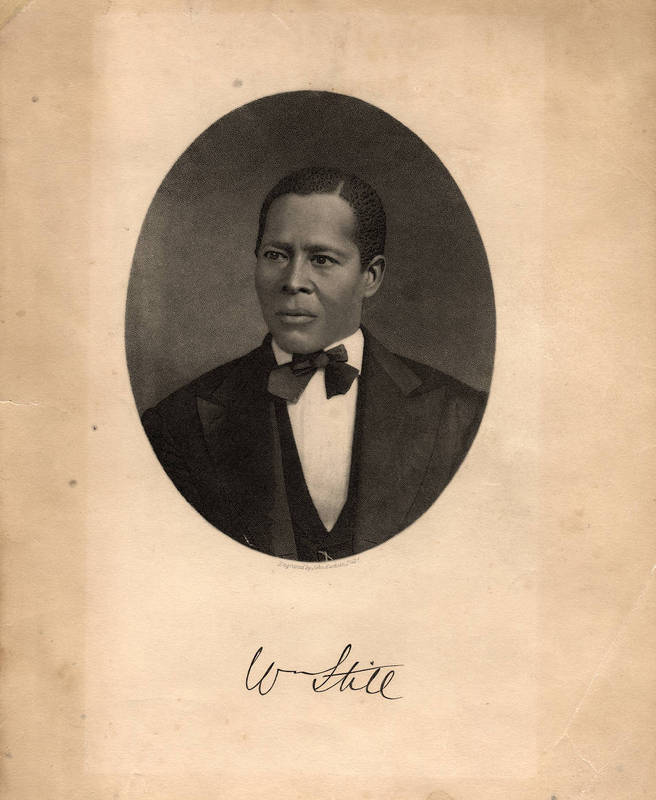 Who is William Still?

William Still, a free-born Black, became an abolitionist movement leader and writer during the antebellum period in American history.  He was also one of the most successful Black businessmen in the history of the City of Philadelphia.  Born on October 7, 1821, in Burlington County, New Jersey, he was the youngest of eighteen children of Levin and Charity Still.  Both of his parents were born into slavery.  His father bought his freedom and his mother escaped slavery in Maryland.  William Still grew up with vivid images of the horrors of slavery.  His parents instilled in him strong family and work values as well as pride and self-determination.  In 1844, he moved to Philadelphia and in 1847 married Letitia George, who gave birth to their four children.  That year, he was hired as clerk for the Pennsylvania Society for the Abolition of Slavery.  He became an active agent on the Underground Railroad, assisting fugitive Africans who came to Philadelphia.  With the passage of the Fugitive Slave Act of 1850, Still was appointed chairman of the society’s revived Vigilance Committee that aided and supported fugitive Africans.

During a period in American history where laws were established prohibiting Blacks, and especially enslaved Africans, to read and to write, one of William Still’s major accomplishments was teaching himself how to read and write. Still had little formal education but read everything available to him and studied grammar.  This act of learning became a form of African resistance to slavery.  He was empowered to document African resistance to slavery as well as to letters to his family and friends and conduct business matters and became a champion of civil rights in the North, working tirelessly to improve race relations.  In 1859, Still wrote a letter to the press protesting the racial discrimination that African Americans faced on Philadelphia streetcars.  In 1867, he published A Brief Narrative of the Struggle for the Rights of Colored People of Philadelphia in the City Railway Cars.

William Still is best known for his self-published book The Underground Railroad (1872) where he documented the stories of formerly enslaved Africans who gained their freedom by escaping bondage.  Still’s The Underground Railroad is the only first person account of Black activities on the Underground Railroad written and self-published by an African American.  He hired agents to sell the book.  His book went through three editions and was exhibited in 1876 at the Philadelphia Centennial Exposition.  Still would continue to write.  In 1874, he published An Address on Voting and Laboring where he justified his support for the reform candidate as oppose to the Republican candidate for mayor of Philadelphia.

As an abolitionist movement leader, William Still assisted hundreds of enslaved Africans to escape from slavery.  After a forty year search, he located his brother, Peter Still, and helped him to escape to freedom.  After finding his brother, he kept meticulous records concerning African resistance to slavery by running away.  Still was very courageous and risked his own freedom assisting fugitive Africans.

He was one of the organizers and financiers of the Pennsylvania Civil, Social, and Statistical Association that collected data on freed men and women.  He was an advocate for universal suffrage.  As a successful businessman, he purchased real estate, opened a new and used stove and coal business and eventually a coal yard in 1861.  Because of his reputation, he was named to the Philadelphia Board of Trade and in 1864 appointed to the post of peddler for the provisions of black soldiers at Camp William Penn.   He was a supporter of temperance and organized a mission Sabbath School for the Presbyterian Church.  He also was a member of the Freedmen’s Aid Commission, organized one of the first YMCAs for black youth, and assisted in the management of homes for the aged and destitute black children as well as an orphan asylum for children of black soldiers and sailors.

Why William Still’s Collection is of National Significance

The Charles L. Blockson Afro-American Collection houses William Still Papers dating from 1865 through 1899.  The papers contain 140 letters pertaining to Still’s family matters as well as 14 photographs.  The papers were donated to the Blockson Collection by members of the Still family, who live in the region.  William Still was a major contributor to the success of the Underground Railroad activities in Philadelphia and a part of Philadelphia’s free Black community that played an essential role in the Underground Railroad. He personally provided room and board for many Africans who escaped slavery and stopped in Philadelphia on their way to Canada.  Through his work with the Pennsylvania Society for the Abolition of Slavery’s Vigilance Committee, he raised funds to assist runaways and arrange their passage to the North.  He was instrumental in financing several of Harriet Tubman’s trips to the South to liberate enslaved Africans.  His book The Underground Railroad is known worldwide.  It is not only important for the meticulous records he kept but also for showing that Blacks had intellectual ability and that they were active participants in their struggles for freedom.